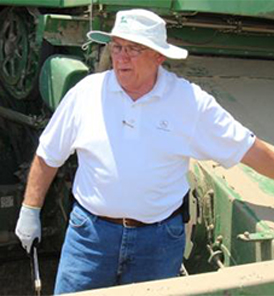 John Aubin grew up in Baton Rouge, LA on a small family farm. His upbringing influenced a lifetime of helping growers with harvest issues. After serving three years active duty in the United State Army, John returned to Louisiana State University in Baton Rouge and completed his degree in Agricultural Mechanization. John joined the John Deere Company in 1974 and spent 35 years with them until his retirement in 2009. During his work with the John Deere Company, John gained valuable experience on John Deere Combines and the competition.

He has consulted with growers in 45 states in the U.S. and has worked internationally in Australia, Germany, France, England, Italy, Sweden, Denmark, Spain, Croatia, Hungary, Austria, Switzerland, Canada, and most recently India.

He is not only knowledgeable of staple crops like corn, soybeans, wheat, barley, milo (grain sorghum), and rice, but is also experienced in specialty crops like edible beans/peas, grass seed, canola, sunflowers, and sesame seeds. John is one of the most well respected combine consultant experts in the industry. Throughout his career John helped growers improve harvest efficiency, reduce grain lost from combines, and harvest higher quality grain. His knowledge and expertise is sought after by growers and end users all over the world.

Upon his retirement from the John Deere Company in 2009, John started Combine Harvesting Solutions to continue to provide growers with combine knowledge to increase their grain/seed quality and reduce grain/seed loss from the combine and header/platform.